Problem/ Question: wiring is good, lightburn was finding laser , doing homing and origin, seems to freeze when i send a job, sometimes job starts moves gantry, but does not power laser. then stops in middle of moving, lightburn still says streaming, but nothing on k40 end, disconnect power to board, sometimes it comes back, but now its just red led and power led green, but no communication, and i removed laser from lightburn, now its not finding it at all
tried restart, unplug usb and power multiple times, not working. is my board fried?
pictures proivided in previous post about extra black and red wires, removed those and wiriing is same as it was

Disconnect everything from the board except the power connector and USB cable. Does the machine recognize it?

Yes, it did without giving me a USB error. But when i tried to run a job, then halted it, it didnt recover, and then gave the usb error. What could be causing it? it only connects the first time after long power down ( 1/2 hour ). after powering the board down, lightburn says waiting on connection, and the board LEDS are all on solid. - 1 red 4 green, but no flashing leds.

I did a power cycle and now only the red led is on again.

OK, with absolutely nothing but the USB cable, SD card, and power cable connected to the board, plug it in and let me know what the board’s doing. You shouldn’t have to power down the board more than a second or so for it to come up in a good state.

You are here: KB Home LaserBoard Diagnostics Cohesion3D Board Indicator Status LEDs This article addresses what the different states of LED lights mean on the Cohesion3D LaserBoard and Mini. If you have an issue with your board, please locate the...

it looks normal once I start it up. I loaded a square, then hit play to cut the line, the console shows it starting, but stops at 99% and never completes no matter how long I let it sit. 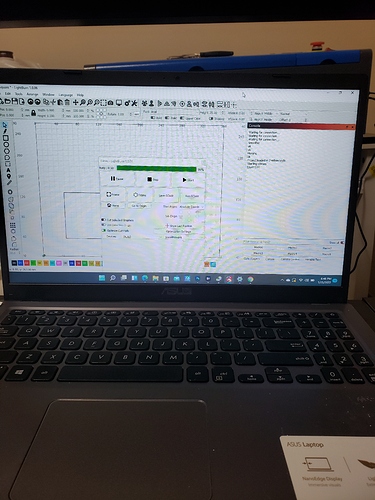 are you running the job with the board disconnected from everything or is the machine put together?

Nothing is connected except USB , power to board and SD card inserted.

OK, please make sure you’re using a new, high-quality USB cable with the board. We’ve seen issues in the past with cheap cables causing problems so let’s rule that one out.

If that doesn’t fix the problem, start by reflashing the firmware on the board. Back up your config.txt, then format the SD card.

You’ll need to put this firmware.bin file along with your backed up config.txt on your SD card. Reinsert the card into the board while off, then power up the board and watch the green LEDs L1-L4 count up in binary to indicate that firmware is flashing. Once complete, the bootloader will rename firmware.bin to firmware.cur to indicate the firmware flashed successfully.

Then, retry your test and see if that does the trick…

It reflashed, homed, then same, read version out , then was unresponsive. I cycled power and got just red led again. Pulled card after power down to check and it did rename file, so it flashed properly. I used two different high quality USB 2.0 shielded cables to see if it mattered, but nothing, unless I power the board down for over an hour, it doesn’t seem to recover, and when it does, it goes unresponsive after the first command. Can you send me a replacement? I really want to get this running and use Lightburn. Here is my laser I have, and since I installed the 3D board my red dot guide doesn’t work either. IF there is any else I can check please let me know. I’m a EE ( but graduated back in the 80’s so I can handle technical ( just not software ).Thanks!!!

I took the board out, reinstalled the original and the laser is running great. I need a replacement board or a refund. i really want to use lightburn software, but I’ve spent too many weeks on this already.

Can you please reply if you can send me a replacement, I’ll be happy to send this one back to you.

I’m working on getting an answer to that … stay tuned. sorry for the delay.

Please fill out the form at https://cohesion3d.com/contact-us/ and reference this thread in the correspondence - someone should be able to assist you with this further.