Problem/ Question: Brand new install, no modifications to the config.txt file.
Homing works fine, when I move the X axis 10 mm its moves exactly 10mm. When I move the Y it moves exactly one half the distance I told it to. So if I move the Y 10mm , it moves exactly 5mm.
In Lightburn when I use set laser position icon and I click the center of the bed the X axis starts moving correctly but Y goes in the opposite direction starts grinding against the top/back of the Y axis.
I can jog in the any direction correctly with the Y but it only moves half the distance.

Here are my basic settings. 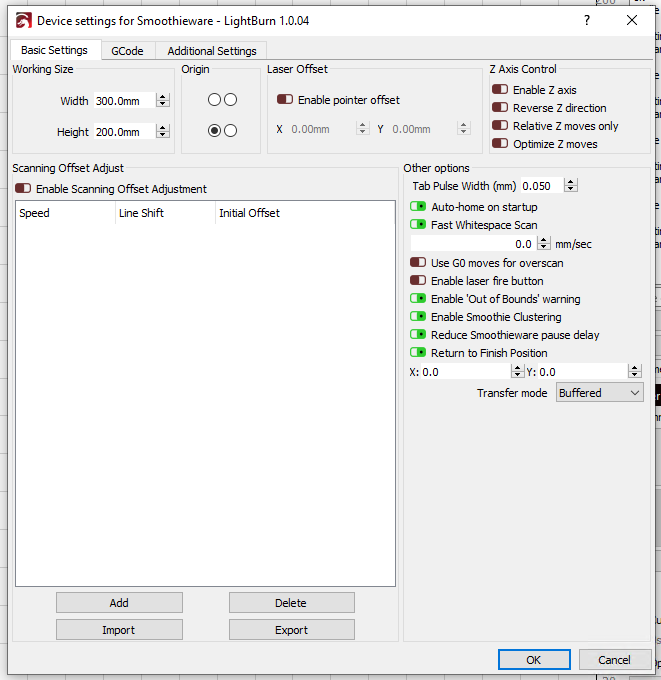 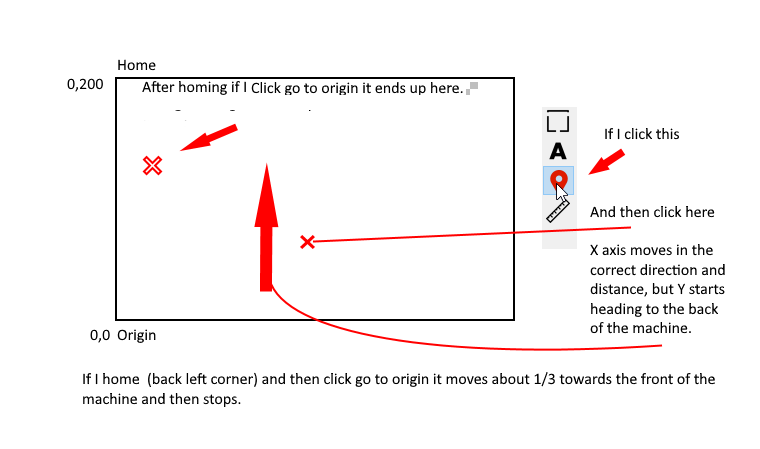 But when I use the Jog controls in Lightburn both X and Y move correctly but Y only half the distance.

You might find this guide helpful. I was having similar issues on not getting a square, it was coming out a rectangle and not at the correct dimension. Had to do with the steps/mm. Check out https://cohesion3d.com/knowledgebase/configuration-adjustment-guide/
It’s #6 in the guide. I assumed that the x axis was alpha and the y axis was beta in the guide. Requires taking the sim card out of the board and doing a little changes to the config file.

Ok I used those calculations you pointed me to and it appears to have resolved my problem. But I am concerned that I had to set the Y to 315.150 to get it to move the correct amount. Is that normal?

Glad this helped, but I’m also rather new to this as well, and wish I could answer with authority but I really can’t. I just know it helped me get my axis issues right. I also tuned up the other stuff. Perhaps some others in the group can comment on whether that is a normal range of adjustment! There are other guides related on the same document page that also talk about settings in the config that might shed some light on this. I just read them all and found other things, like setting current on my z-table steppers that were helpful but hidden until I read everything!

I have to admit it seems like official support is very lacking here. With how I saw people promoting the Cohesion products I was expecting a little more in the way of support than I am seeing.
In any case, although its working, I still think something is not exactly right. I have been running CNC machine and multiple 3D printers for years and have never had a situation where I had to double the steps per mm to get an axis to move correctly like this.
I will continue to investigate and if I come up with a reasonable explanation I will post back here.
Thanks again for your assistance.

Ray’s paid support engineer had a family emergency come up and had to step away for an undisclosed amount of time (as it states in the banner above). Consequently, he’s forced to perform that support role in addition to the rest of the company responsibilities or rely on volunteers like me to come in and assist in our spare time. I definitely can’t dedicate consistent time to this (as much as I’d like to), and Ray’s admittedly very busy trying to track down parts to make sure the business has products to sell. This has been made extremely difficult with the global supply chain problems, shipping delays, semiconductor shortages, etc. - it’s not an easy time to be in the electronics business.

In any case, the board comes with a default configuration that works for most K40s out of the box. For most users it’s generally a drop-in replacement. I say most, because the chinese manufacturers will change the specifications and parts of those units on a whim depending on what’s cheap that day. This leads to the end user needing to change the config file to get their board to work in certain circumstances, and may not be 100% problem-free from the get-go. It should be assumed with a retrofit product like this that a certain amount of tinkering may be required to get your machine fully functional.

Your particular issue crops up from time to time - it isn’t unheard of, but it also isn’t super common so there isn’t a section in the documentation area to cover this specific case (but we do have documentation on motion calibration in general, which will apply here). In any case, that value doesn’t seem out of line, and as long as your cuts are accurate it will be completely fine.

Thats all understandable, and I can relate, but at the same time that shouldnt be the customers problem. And discussing your personal issues with customers is probably not a good business descision. All that does it make it look like a struggling company and will make customers likely to not make purchases if it looks like the company is unstable.
Honestly had I know all this before I purchased and the support just wasnt going to be there I would probably held off or found another solution.
It boils down to I spent right at three hundred dollars for this board and expected some level of support.
Lets be honest how hard is it to send a private message here and just say “I see your request for help, I will get to you as soon as possible.” Hiring some more staff might not be a bad idea either.

One of several things is happening:

Taken at face value, this would mean that China decided to put a 1.8 degree motor for your Y axis instead of a 0.9 degree motor like on all the thousands of other upgrades we’ve done. I don’t think I’ve seen that happen before, and if I had, it would have been another very rare case, like yours. However, everything in that machine, down to the color of the wires, depends on the technician’s mood, the position of the sun, and whether your machine was built before or after lunch (and how many beers were consumed during said lunch).

The other option would have been if the Y motor was skipping when moving. Although that would not have resulted in “exactly half the distance, 5mm instead of 10mm”.

If it was skipping, I would have suggested the tuning that Allen linked.

If everything is working now, there is no reason to be concerned.

As for the other matter, I do apologize for any delays or periods of silence you may have experienced with getting help. loather explained the circumstances of what’s going on above. I appreciate your input, but I’m not able to get into a full discussion of how I run my business.

Thanks for the reply. As for the other matter, I prefer not to know anything about how you run your business or personal matters.