Long story short decided to do a complete rebuild of my old K40 into a custom machine. (Laser tube and PSU about the only things that came over)

Total the new frame is 1000mm x 500mm. I’m using a single NEMA17 dual shaft motor for the Y and a single NEMA17 single shaft for the X, using GT2 belts lopped and connected to their respective carriage.

I have noticed that even at slow speeds I get a wobble in my lines at the start of a cut or direction change, and a slight misalignment when the cut ends. I did some test burns at 5, 20, and 40mm/s and they all show this wobble and misalignment. I think it’s in different spots of each test shape due to the order the burns were made; but at 5mm/s I would not think speed had a big influence.

Could the GT2 belt be acting like a big spring, especially on the X axis since the loop is nearly 2meters long as it’s a loop. I can’t think of alternative movement options that would not add a ton of weight to the moving carriage and thus intera.

I am using linear rails to guide the movement but of course they are mounted using 3D printed parts so their rigidity could be better.

Photos on my test burns attached. 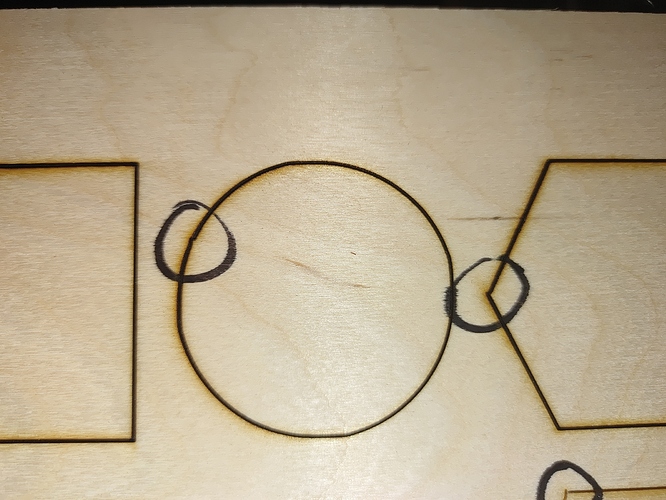 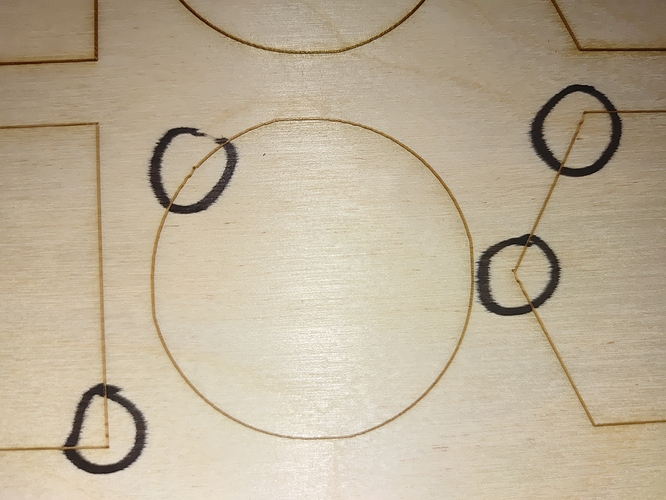 Only thing I can suggest in this case is to make sure those belts are tight (but not too tight). You are correct in diagnosing that it’s likely slop in the belts causing this. Linear rails are unlikely to have a lot of play in them but it’s worth checking that too (and greasing them lightly even though acetal is supposedly self-lubricating).

Bigger carriages are heavier and have more inertia, too. Motors with higher holding torque will help there but that’s another redesign of your machine. A leadscrew would help instead of using a belt, too, but again, another complete redesign.

Any idea what other designs use?
It’s hard to tell online but it seems quite a few machines in my size range will use belts, is there an objective way to measure the tension?

Leadscrews are how I would do it on a machine that large. Belts are cheap and easy to integrate, which is why a lot of machines use them.

I see… But if I use a leadscrew on the Y axis, which I’m currently using a single motor, with extensions connected to GT2 pulleys, if I used a lead screw, wouldn’t I either need two motors or a bevel gear to change the direction? Wouldn’t have the gears introduce backlash on smaller movements?

The only real way to do it is (contrary to best practice advice) to have a second Y motor slaved to the first and drive the screws independently. It might be a good idea to mechanically couple them with a belt at the far end of the screw just so they stay in alignment once everything is squared.

It’d need a redesign but what about moving away from a Cartesian design? One of my 3D printers is setup as a CoreXY and has no movement issues, if anything it’s more tolerant of faster movements.

I see the the settings listed in the config file but i’ve not really seen anyone implement such a system. Is there a flaw I don’t foresee?

Give it a shot. I’m a fan of corexy machines in general and I know the smoothie firmware can handle them so give it a shot. It’s gonna mean a huge belt though