Problem/ Question: Lightburn (Ver .09.03) isn’t moving Z height as set in cuts when running. Everything else is perfect AND Z table does move up and down perfectly when using the UP or DOWN arrows in MOVE TAB in lightburn software . Where do you begin to troubleshoot why it isn’t moving the Z upon starting the cut (“Z Offset / Z Steps per pass”) when values are assigned???
Thanks!! 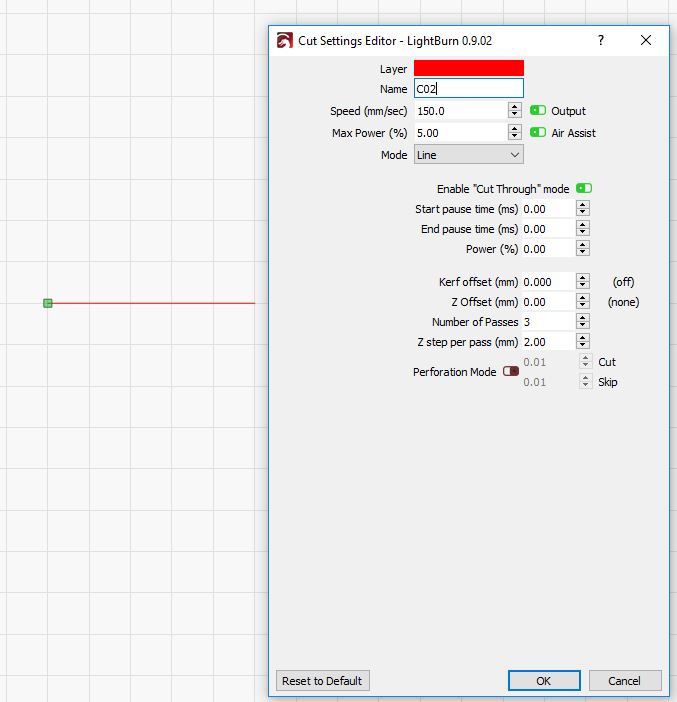 Z per pass not working

I am having the exact same issue. I am using C3D laserboard with LB 0.9.02. I tell my cut setting to make 3 passes and raise the bed 2mm per pass. Nothing happens with the z axis while the cuts are made. I am able to jog the z bed up and down in LB...

Save your gcode instead of running it, open the file in notepad and check to see if your z axis g0 commands are present first. Can go from there

Do you have the z axis enabled in lightburn settings? 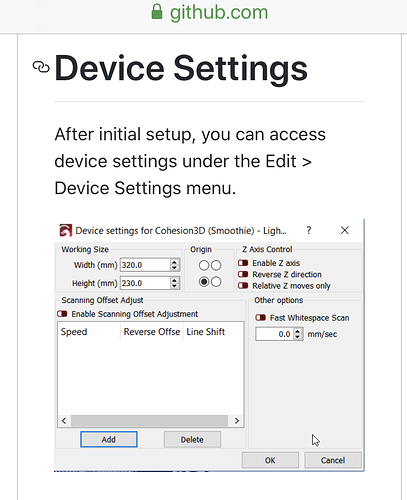 OK, NO, It wasn’t. I tried and still no luck. Although it sounds like it’s trying to move it, although way too quickly. I tested @ 2mm/sec on cut speed to see if that trickled down to the z speed and it didn’t make any difference. It sounds like a quick high pitched noise at the start/end of cut now.

OK It looks like it’s trying to send it to Z -5mm but isn’t telling it a mm/sec?? See below… thx

Thanks - I also checked out the other post and set per the recommendation:
“I’d recommend turning on “Enable Z axis” and “Relative Z moves only”, as shown below…”

Same thing, seems to not even give enough time even if it did send the command for the table to reach position before starting to cut either. I’m assuming it doesn’t know how quickly it makes it to the z height set in the cut?

Try some gcode moves from the console in LB. also look in the config.txt file. You can lower your acceleration there as well as max speed. Bot should be significantly lower than alpha and beta. While you are in there confirm your steps per mm are correct. You can calculate what it should be knowing your steps per rev and screw pitch. Ex 1.8 degree per step motor is 200 steps per rev and 5mm per rev screw pitch would be 5/200 or steps/mm. I forget if it is steps perm or mm/step but you get the pi ture

I tried editing the gcode but am not getting anywhere. I’m seeing how to change the feedrate on that particular Z move and having no luck. I’ll test thru the console as you suggest to see if any difference. Thanks

OK - Same results when just sending a straight Z-5 say. But if I try to put in a feedrate with that command it stops even the high pitch if I go back to just the Z-5 without a feedrate. I don’t even know if I’m doing the feedrate correctly, but tried before and after the Z-5
Ex:
G0Z-5 (high pitch sound - like if I have feedrate set too high on Z in move tab)
G0Z-5F120 (nothing)
Z05-5 (now no sound…)
Power cycle board and it will make high pitch sound with straight G0Z-5 again.

Am I totally messing up putting in a feedrate (syntax) with gcode here?

Check the feederate and acceleration in the config.txt. I believe this is the default if you don’t enter a feed rate in the gcode.

Done - that was it!!! (config.txt) Thank you. So by default G0’s are at like 25000 and had to lower to 120!!! Should it be using a different command with a feedrate that could be set vs global G0 seek command?? I’m no expert so just happy it’s working. Works on all scenarios for Z amt per layer and just offset in cut settings.

I am definitely not a gcode expert. Might want to check the smoothie feeds for info on that

Glad it worked for you

G0 commands are for rapid moves and typically, (in my experience at least), get issued without a feed rate - simply going as fast as the machine is configured for. They can take a feed rate though and that’s how I’ve been testing my machine. Any G1 command would likely have a feed rate associated with it, which of course should/would likely be different for X/Y moves and Z moves.

I’ve just taken a quick look through the config file and don’t see a separate default for Z, but there is a gamma_max_rate. If you set this to 120 and left the default_seek_rate and alpha/beta_max_rates at 24000, (or whatever works for your machine), the lower gamma rate will prevent the machine running the Z axis at the default_seek_rate.

I just noticed that there are also x/y/z_axis_max_speed configurations too. Not sure which of these drives what, but I’d set them the same as the alpha/beta/gamma_max_rates absent any reasoning as to why not to.

I don’t have a Z axis on my machine yet as I’m still in the process of building it, but I tested this out by setting my beta_max_rate and y_axis_max_speed to 120 and issued some G0X__Y__ moves. X went at full speed and Y crawled along at 2mm/sec.

Well, I was trying to keep up to date and updated to the latest version of the software. Now it’s not working the same. It’s using the new rate to position itself and also the z table height. So it’s super slow to find it’s places to cut then speeds up to what is set fine. It seems like it wasn’t using the G0 feedrate to position prior version of the software now it is???

Thanks David - let me see what I can try off what you suggested here!! Gamma max rate might be the answer…

For homing there’s also a section near the bottom of the file with alpha/beta/gamma fast and slow homing rates. Fast is the rate that it travels until it hits the switch, it then backs off the homing_retract_mm distance and activates the switch again at the slow rate.

Great to know about the homing rates too!!
…So I tried what you said and changed z max to my 120, the other setting back for G0 and all is great again. Thank you so much!! Good luck with your z axis build as well.

And more odd thing now, I see. I am making cut’s with a Z offset. It works perfectly, but “retracts” between each cut. So if one “cut” has multiple lines, it moves the z axis each time back down then back up “into” as set. Is there any way anyone knows how to not “retract” between each cut line within a single cut??? thanks

That might be a question better posted over on the Lightburn forum. Since I’m still building my machine I haven’t got to grips with the software yet.