Laser stops in the same spot

On Monday I ran into an issue where the laser stops in the same place and then will not communicate with the computer. Then a notification pops up that the laser was not ejected properly, but I did not unplug the cord. I had to restart both the laser and computer to get them to communicate and then it happened two more times. I tried a different cable and finally just shut everything down.

Yesterday I started fresh and after pondering it in my sleep realized it happened in the same spot, but only on the 45 degree cross hatch so I switched to a horizontal scan and took off cross hatch on the lower portion of the design and so far it’s working.

Could this be the control board, artwork (vector) or something else in my frankenstein K40? I am running lightburn on a Mac if that is any help.

It would be good to see pictures of your machine, board, and wiring for starters.

Is the halt happening on a particular file only, or with different jobs?

It only happened with one file engraving with a cross hatch at 45 degrees. I was able to engrave the same file horizontally in the same location in the bed without any issues.

As a new user I am limited to one photo 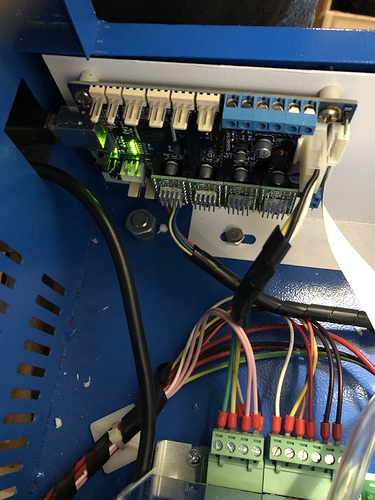 I still don’t understand if the issue is limited to one particular job or you can get it to happen with multiple different jobs, designs, etc…

I’ve bumped you up a trust level, you should be able to post more pics now.

I have not been able to replicate the error, but have also been working around using 45 degree cross hatch engraving to get another job done. I should have time to test it again this week.