I just looked up the power supply that fslaser used. Im starting to get a much better understanding of the wiring scheme. I didn’t realize that the PS has an option for “low coolant level” detection. This will definately be incorporated in this conversion.

Also, I now have questions regarding PWM laser conrtol.

Here are some quick thoughts as I scroll through it:

I unscrewed the right side panel. I had to pull one of the wires (it had a spade style connector) to the IEC plug in order to not put strain on it when I put the right panel all the way down on the table.

X and Y motors were easy - just take the wires out of the original screw terminal blocks and put them to the screw terminals on LaserBoard.

Endstops - the bundle of green and black wires all want to go to ground. You see them going to the ground on the power screw terminal at the top left corner of LaserBoard. As identified they are opto sensors which means there is an LED - I soldered I think 120 ohm resistors (feel free to check my color code) in series with the red wires then those went to 5v on the endstop row with dupont jumper wires. The white wires are the actual signals. They are wired to Sig on X Max and Y Max.

We need the green wire L to Laser Fire screw terminal and a Ground wire from the LPSU to Laser Gnd screw terminal. Since LaserBoard has its own power supply we do not want 24v or 5v from the LaserPSU. 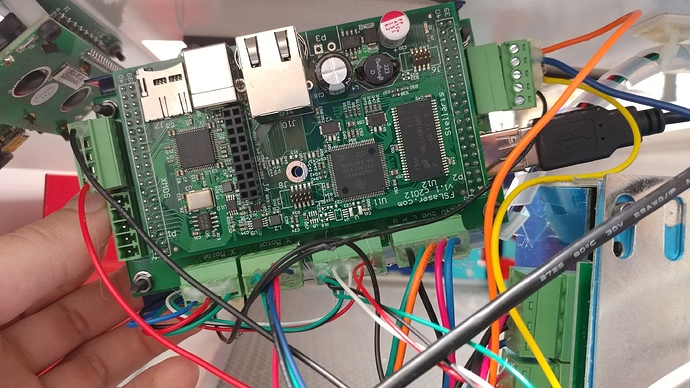 Finally, the stock board had one very strange thing - you see the screw terminal plug next to the USB Jack? See that resistor across the 2 wires? They did something, perhaps a bit too clever, so I’m calling it weird. One of those wires - either the orange or blue one, is the return from the laser tube. It’s almost as if they were current sensing the actual firing amount of the tube on the stock board. The other wire is an LPSU ground. With that screw terminal block simply unplugged and left alone, it was arcing and the resistor caught on fire. We eventually figure it out. The orange to blue wire soldering was effectively directly connecting the laser tube return to LPSU ground. 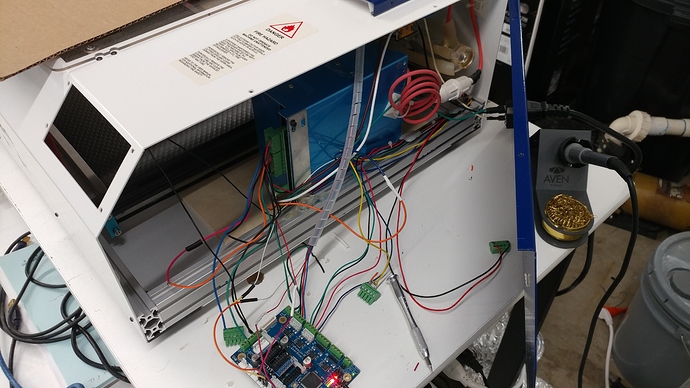 I think the pink and orange wires getting soldered together had to do with bypassing some safety that was preventing the laser from firing. I honestly don’t remember.

I’ll have to dig up the config file. It will definitely involve tuning. I think I turned the speeds and accelerations down somewhat. I had to set both alpha (X) and beta (Y) to home_to_max and set the alpha_max and beta_max to the correct bed sizes. By no means a final configuration, but we were able to raster a bunny with it. 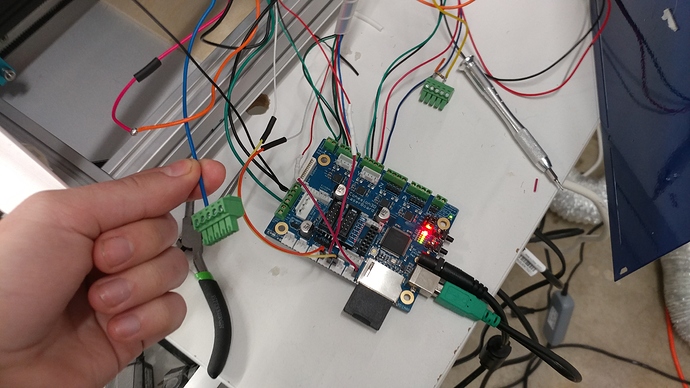 One of those wires - either the orange or blue one, is the return from the laser tube. It’s almost as if they were current sensing the actual firing amount of the tube on the stock board.

I’m sure that is what they are doing. The weird thing is, I’ve seen a Gen 4 board from a PRO series machine and it did not have that wiring. I wonder what is so special about the hobby machine?

As per the top photo, my controller did not have the connector with the resistor.

Here is what I have coming from my lPSU. I see the green “laser” wire. But where does the orange wire go to on your board? It comes from the PSU for pmw control. 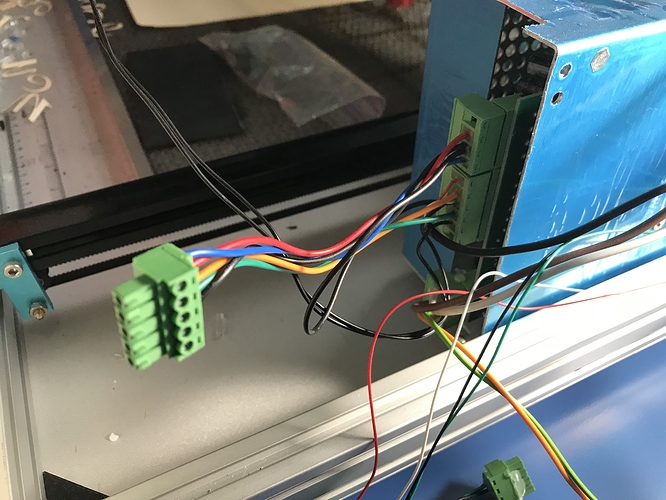 It was not my machine in the pictures, and I no longer have access to it.

This might help. The LPSU is a known model. 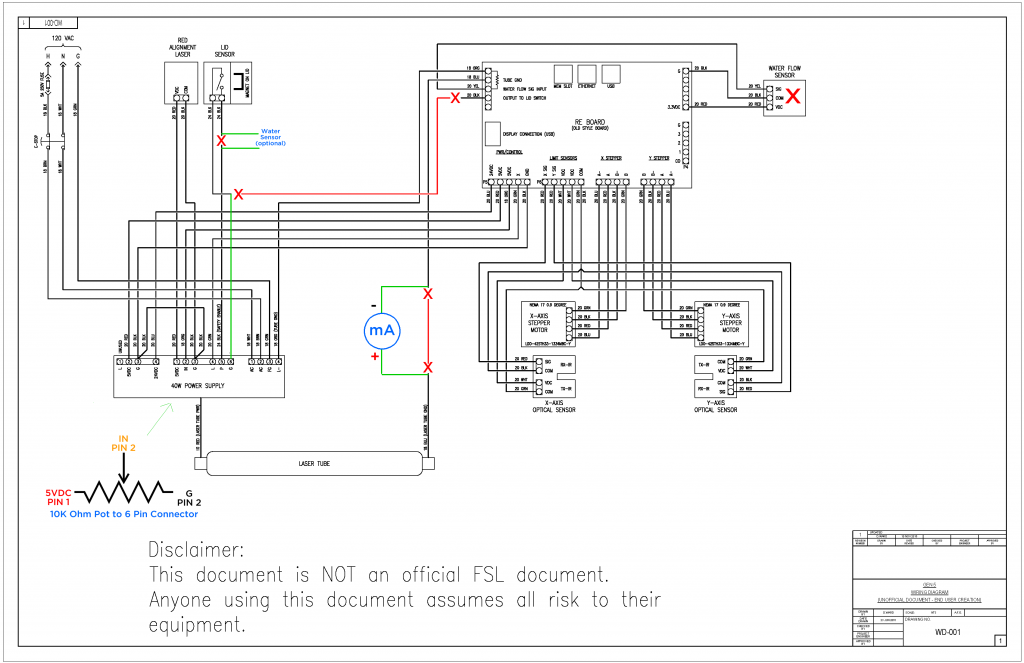 This unofficial diagram has been modified to show connections specific to board replacement with the Cohesion3D Mini. This is for reference only. Thanks to Dwayne Ward for the excellent diagram!

If I see correctly, it would appear that the Orange wire is in position 5 which is IN. I tied this to 5v which is the red wire. It looks like the FSL board did this also.

Then we can send pwm to L to control the laser:

Note that by tying IN to 5V, if you ever press a physical test fire button like the one on the LPSU, or you run at 100% power in LightBurn, you are firing at 100% of 100% power, and this will degrade your tube’s life.

Thanks! Making some connections right now. Will let ya know how it goes!

That’s what I would expect, a one to one corelation in regards to power output of the laser.

We usually avoid this because the K40 and other such lasers come with a pot to set the power which we use to set the max power, read:

We get asked about these things a lot: Does the Cohesion3D control the laser power? (Yes it does, just throwing it out there) Well then why do I still need the potentiometer that came with my machine? I have the oh-so-fancy digital panel instead of the potentiometer, is the Cohesion3D compatible with that? Seriously, why can’t I just get rid of the digital panel and let the board run the laser power entirely? These are a small subset of the types of questions we get asked and answer on a reg…

Success!! She’s up and running. Now to dive in and learn the subtleties of the Lightburn software. Maybe even a few more config settings to fine tune it some more.

Success!! She’s up and running

Maybe even a few more config settings to fine tune it some more.

We should probably compare notes on that at some point…

Sure thing. I’ll start writing out a detailed process of the conversion. Right now it looks a bit Frankensteined because some of the connections were terminated with a different colored wires and connectors. This was just for convenience to get it working. I will reterminate the connections with proper colors and clean it up some and document. Then we can compare and edit.

Today I will be working on a mounting solution for the board and designing a holder for the lcd screen. I might browse the interwebs for some designs and then just modify it to my needs. If there aren’t any good ones already out there, I’ll start from scratch. I’m gonna add some switches for coolant on/off and one for air assist manual override.

Thanks for the help so far. By the way, is it possible to get the pin schematic for the lcd screen hookup connections.

No worries on the pin out for lcd. I just ordered the connector from your website.

Just in the process of converting my 5thgen over to the laser board.
were you able to use the existing water flow safety switch or did it need to be replaced with a 2 wire model vs the current three wire one in the machine. if you used it how did you wire it into the system?

Make sure to fully review the images in Dropbox linked in this post:

Here’s the photo dump: https://www.dropbox.com/sh/ukp2udhk8tb6h6s/AAAFRrtw84HY-gtcASKcUxS6a?dl=0 Here are some quick thoughts as I scroll through it: I unscrewed the right side panel. I had to pull one of the wires (it had a spade style connector) to the IEC plug in order to not put strain on it when I put the right panel all the way down on the table. X and Y motors were easy - just take the wires out of the original screw terminal blocks and put them to the screw terminals on LaserBoard. E…

If I recall correctly, I left the door magnetic switch wired directly into the LPSU.

The water safety switch in the machine was attached to The fsl board. The switch itself Has three wires and I was wondering if it could be put in series with the magnetic door switch on the lpsu and if so how the wiring would look
or do i needed to purchase an analog style flow switch that is only two wires for that?

I honestly don’t know anything about how that flow sensor works. I think 2 wires are power and the 3rd is signal out?

I just left it disconnected. Don’t ask about that time I totally didn’t run the tube without water flow.

Some of the K40’s do have some sort of flow sensor that is wired directly through, that could be worth looking into. And yes, those probably only have 2 wires.

I have the machine all wired up and it runs great until I enable the laser to fire then I get an grbl alarm 3 message whenever it is part way through the cut any thoughts? The alarm will happen both if laser is being fired by the control or being fired manually while the machine is in motion.

Update when running the laser at 2% power it appears to work properly and the time before it triped the alarm does vary A little but it seems that the higher the laser power the shorter the time the machine operates before tripping the alarm.

Got everything running had a grounding issue within the machine the machine box wasn’t properly grounded and caused feedback on everything when the laser fired. This is so much better than the stock FSL board

Hmmm, I may or may not have experienced that