Dialing in the low end for engraving

Machine: K40 Nano M2
Board: LaserBoard
Firmware: I have a new board and I’m using whatever it came with
Software: Lightburn - gcode version
Problem/ Question:

Hi Forum,
First many thanks for such a great resource. I sincerely appreciate all of the contributors. I will advise that I am a complete noob, having just stood up this machine about a month ago, having spent every weekend and many evenings with it, and enjoying every minute spent.

I’m interested in dialing in my machine a bit for engraving; birch and acrylic mostly and I use a lot of chipboard for test runs. I’ve been surfing and reading many posts, running several tests (ramp test, standard testers), and am happy to provide additional info as needed.

I realize settings will change based on media and machine, but I’ve noticed some oddities with my K40 for which I’d like some advice/direction.

Here’s my machine, so you know which K40 variant I have 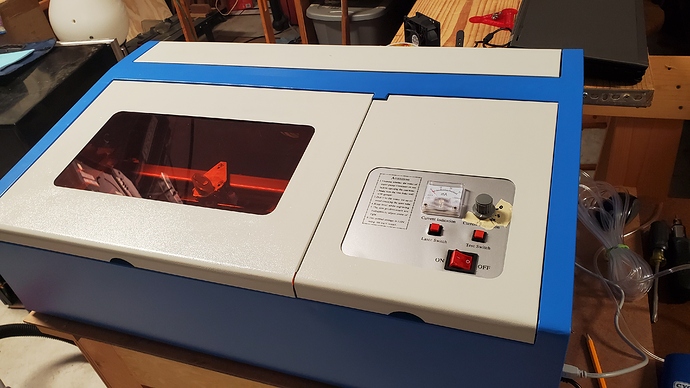 Power, enable, and test buttons and most importantly, ammeter.

And my laserboard; ribbon cable on the y-axis variant. 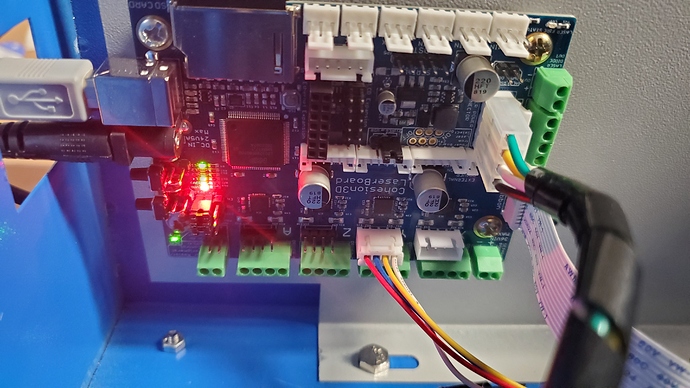 I noticed that my “engravings” using greyscale were not offering much variance, somewhat akin to what I found in this post, with similar results on both clear acrylic and chipboard.

After reading that post I did a few things.

First, checked the response to %s of the power setting

With this I noticed that the ammeter on my K40 seems to be run quite high relative to power %. With these settings; 10mA / 10%, that line cuts at about ~4mA, at 20% it’s ~5mA. In fact, issuing and monitoring the commands from this post, the ammeter pegs quite high across the board, topping out early on the high end at 70%-100%.

I didn’t expect the output to be linear, so went poking around a little more and came across this article (which is a doozie) and that’s where i read (vs learned) about the complexities of PWM frequency and how it might be adjusted. However, even with a PWM setting of 400, the ammeter still pegs at about 3-3.5mA at 10%, 4-4.5mA at 20% with the pot still fixed at 10mA output.

So to explore a little further I did a few more experiments to get a better sense of things, this time with the pot at 10mA, speed of 50mm/s, and power settings between 1% and 5% (from comments on that 1st article), looking at two variables (independently), PWM [200|400] and DPI [254|400]. The results are interesting but raised more questions. 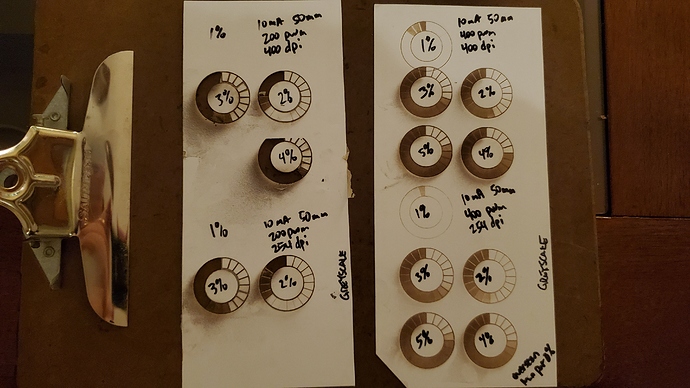 First, you’ll notice that the media is card stock. I picked it because it’s white and would show any marking better than birch or chipboard.

Questions
So my questions are these.

Am I on the right path? How else might I make adjustments on the low end?
At 10mA and 10% the ammeter registers ~3-3.5mA, even with a PWM of 400. From what I’m reading that seems high, with an ideal of around 1mA. I’m not expecting perfection/absolute linearity, but want to understand this response and anything else I might do to drive it lower, perhaps additional settings. Thoughts/Suggestions?

It also appears that there is some power threshold below which results in zero effect on the media as illustrated in just about every case. I think that’s obvious, but I’ve also noticed a minimum power % setting for a layer. Wondering if that might at least bookend the drop off? Thoughts? Anyone use that setting?

Any other suggestions are welcome. 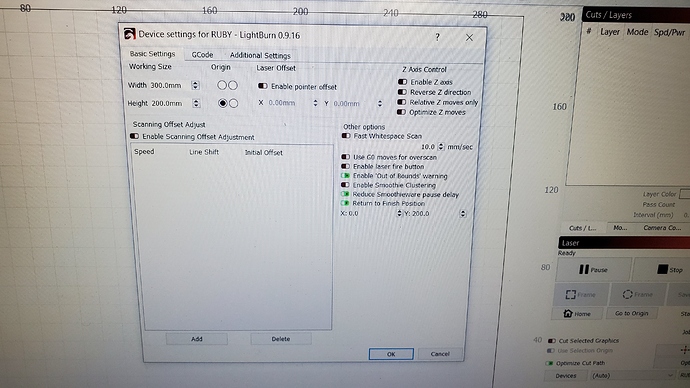 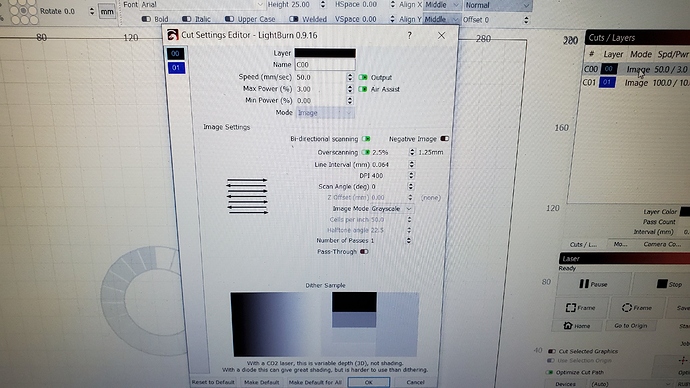 Thanks for your time.

We’re working on digesting the entire content of your post (lots of words, yay, but in a good way), but the short answer is to bring the pot value lower.

10mA to 15mA is a good general purpose value, but not by any means the lowest value. If I’m doing work with paper, I’m bringing the pot down to 1-2mA and then adjusting the % in LightBurn accordingly. In fact, I know several people where those were the 2 marked positions on their panel: 2mA and 12mA

Your first process is on the right track. Set the pot and do a test fire to make sure it is at a certain value. Then do a line at 100% power to see that you are still at that value. Then play with 50% and lower to see what actual values you are getting.

Thanks for the reply. I realized that it was a lot when I posted; it was late, I over compensated on the info, and frankly, no one’s ever called me terse.

Been a busy week this week but I have been noodling on it and came to a similar conclusion… if I can’t further manage the power distribution, maybe I could translate it downward by adjusting the overall power. Will play around with that this weekend and see what happens.

Was very thankful for the article on PWM. There’s a noticeable difference in this device with that adjustment. Thanks again for the reply and hope you and the team had a great Labor Day.

I mean, many of our support inquiries consist of 2 sentences fragments, so this was a welcome change from that

. I do best with digestible chunks of the right amount of information with simple words. The stuff that I saw in your post was a good place to start and it sounds like we’re on the same page for the moment

I did my first trad lead climb outdoors last weekend, so considering the anxiety associated with 1 misstep resulting in a large fall and spinal injury, it went well

I think Starla got some good time to relax also.

Hope yours was good as well.

A big wow on the trad lead climb success! I had to look it up and that is not a sport for the feint of heart. Many years ago I did some climbing inside some old converted grain silos and that was enough for me to know that its not my thing

These days my hands sweat just watching videos of people climb. Congratulations and I wish you continued success and great adventures.

It was a productive weekend and I was able to do a fairly decent job of getting a nice gradient across some chipboard. Two things really helped.

Again, many thanks for your support and for building the community. 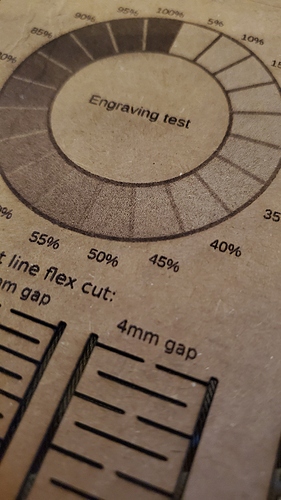