Not a recent install, has been working great but today it seems to have died.

When I connect to the PC the laser does not work, no connection to GRBL however it does show up as a USB device - Oddly windows 10 identifies it as an ambulo 2400. I have swapped the driver to “USB serial” and still no joy.

I have tried the following

My LED’s do something peculiar.

VMOT and 3v3 are lit all the time.

L1 is lit when no USB lead is connected and out when i plug it in. Merely touching the USB lead to the case causes L1 to flicker. Other leds only flash doing the firmware update otherwise they remain off. 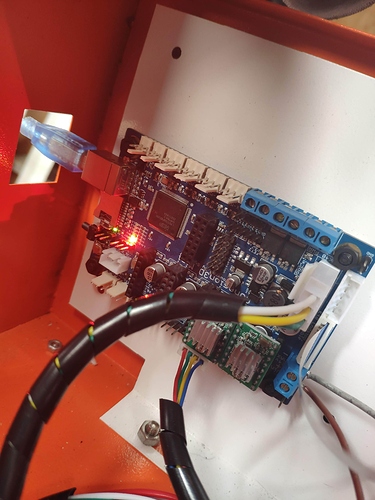 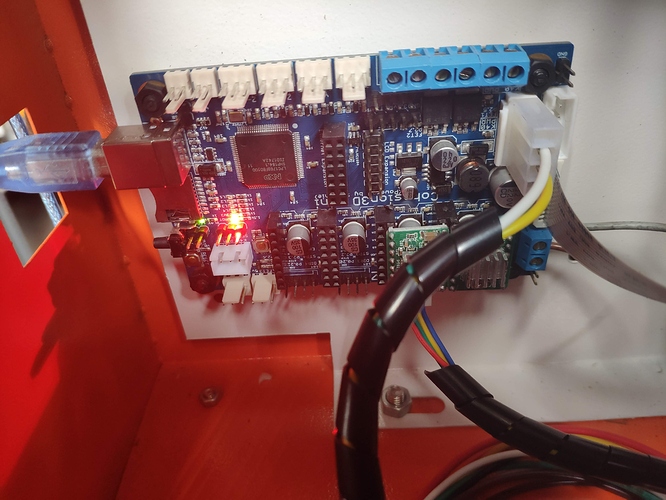 Note: No SD card inserted in the photo, however it is inserted when testing!

This is a video of the weird led issue.

Hi Ryan, thanks for the detailed report. We saw a few things in your description and photos that we’d like to ask about.

This is the GRBL-LPC firmware for Cohesion3D Mini.  It has been modified for the endstops as they are configured on this board.  This is a 3 axis version (XYZ), no rotary support in this compile:...

And here’s a link to some other resources for the Mini if you need them:

Thank you for your purchase of a Cohesion3D Motion Controller Upgrade!  Circuit Boards are sensitive to electrostatic shock, please ground yourself before handling and observe all proper practices.    All documentation about the...

If you can answer these questions and get the correct firmware flashed, we can go from there and hopefully get you back up and running again.

Yes, that’s my spare cable. I usually use a better quality black one but this was just for testing. I have since switched back.

Yes the board is isolated from the frame mounted on plastic standoffs - I had read it was an issue to mount using conductive fixings so avoided that when doing the install.

Yes, the earth was none existent when I got the machine (bolted to the paint not bare metal). I fixed this before the conversion.

My bad on the firmware, I have tried the correct firmware but still suffer the same issue. Windows identifies the device incorrectly and I cannot connect. It’s very weird :-(. The board flashes the status LED’s as expected when uploading new firmware too.

Hmmm, the Ambulo 2400 seems to be an “Ambulatory Blood Pressure Monitoring System” that does connect via USB. Have you ever had one of these connected to your Windows computer? I’m wondering if trying to reset/clear the COM port the Mini shows up under might be worth a try.