We are experiencing similar issues and I was reading along all these threads. @Starla, if you want me to open up a new one let me know.

Mostly during engraving, but also noticed with cuts, we have drop outs. The console reads “disconnect”, the machine homes but our air-assist stays on weirdly enough. To me it feels like a reboot of the laser motherboard, but unfortunately I cannot find an uptime function in the commands (or is there?).

Due to our large bed (1200x1200mm) we have engraving jobs that easily go over half an hour and if they drop out half way, we can throw away our sheet… 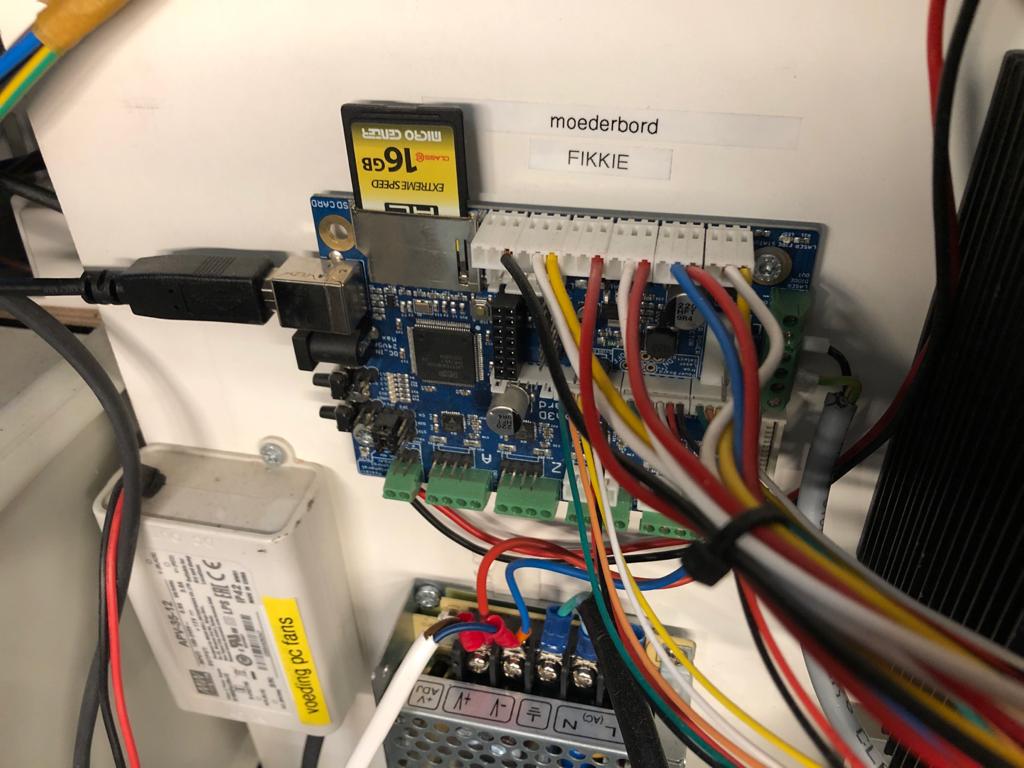 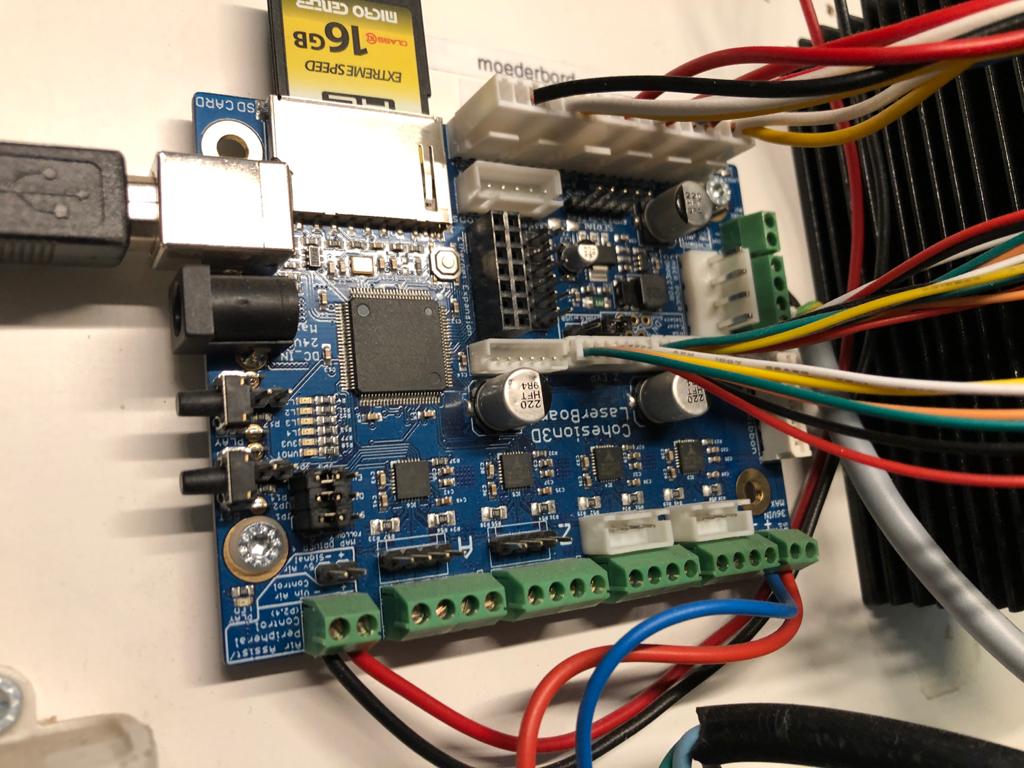 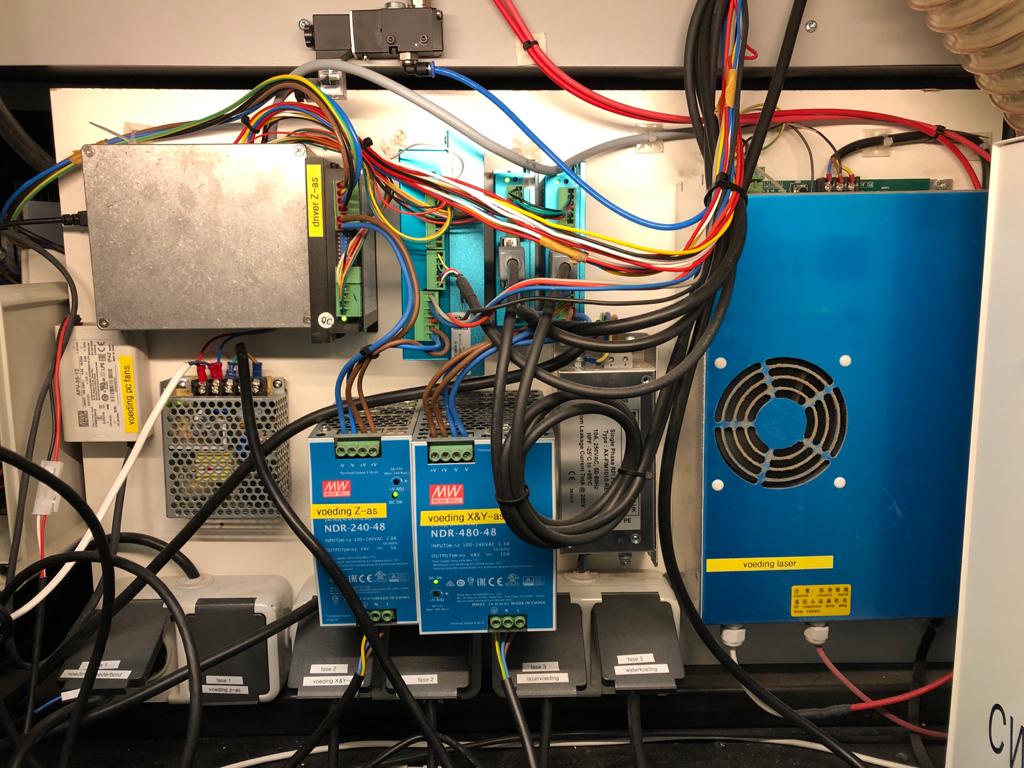 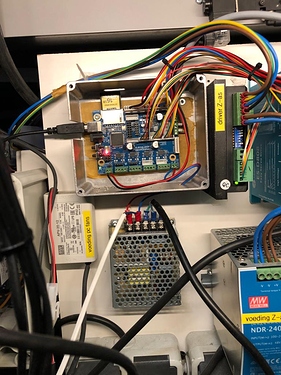 All help is very appreciated! Feel free to ask any question or more info that is required

the EMI is probably coming in on some of the wiring. Route the high voltage lines as far away from the signalling lines as possible - in one of your pictures above it appears as though they’re crossing some low-voltage wiring. Please ensure that is not the case

We’re sorry to hear about the issues you’re having with the board. I moved your post to keep from getting the streams crossed when responding.

Also take a look at our USB Dropouts and Brownouts article and let us know if you’ve gone through these steps.

Due to our large bed (1200x1200mm) we have engraving jobs that easily go over half an hour and if they drop out half way, we can throw away our sheet…

On a positive note, the new LightBurn release helps in this regard by allowing you to restart partway through a job. Update via menu Help > Check for Updates and check out the new features:

This is a fairly large release, so we'll go over the big things first: Tool Layers These are layer colors that will never be sent to your laser, and are designed to be used as rulers, guides, alignment tools, paths for text, image masking, and so...

Hi Loather & Starla, thank you for the help!

@Loather, gees obviously the case had to be grounded - why didn’t I think of that? Just grounded it and running a full-hour engraving job to see for dropouts.

@Starla that is a great option indeed! Pretty tricky to get it exactly right while engraving, but with cuts that is absolutely a sheet-saver

A post was split to a new topic: Frequent Dropouts

I have run multiple tests and unfortunately cannot say that it has been improved.

A recap of what has been changed / tested:

In the console I see the following:

@Starla, do you know if it is possible to enhance the console on lightburn? For instance, I am looking for time stamps and a full export. All I can do now is turn it to “show all” while running, and then selecting everything and pasting it in a text file - but this obviously does not cover the whole job nor does give any representation in such big files how long it is already stationary. It will only say however “job finished in 54min 12sec”, but not when it started.

After talking to several experts on the topic of automation and computer connectivities, we found the following story.

Hifi geeks do not like to output sound directly from their motherboard to their Hifi systems because apparently the noise from the motherboard (shared lanes & chipsets on the motherboard between network, USB, audio etc) is noticeable in the audio signal.

This is why they prefer using an external DAC over USB. However, also these sometimes output noise coming from the USB signal (sounds familiar, no?)
These noisy USB signals are often resolved by using a dedicated USB expansion slot through USB Express, or for instance with a decoupling circuit, such as an external USB hub that has its own power source.

We have added a bog standard USB hub that is externally powered, in between the USB outlet of the motherboard and the Cohesion board. To be sure, we have added ferrite cores on the cables and the power source is also behind the line conditioner as used for the motherboard 24V power supply.

Yesterday we have ran several extensive jobs without any trouble! And by that I mean over 3hours of continuous engraving

We are putting it to the test in the next few days, to see if this indeed seems to have solved the problem or that we were celebrating a little too early.

If this is the case, then that means there is room for improvement on the Cohesion board itself for when it comes to decoupling the incoming signals. That also underlines the different experiences between for instance the Smoothieboard or M2 nano, and the Cohesion3D.

Update: To answer your prior question about timestamps (in case you need it later), there is an option under Help > Enable Debug Log which creates a text file in the Documents folder called LightBurnLog.txt. It’s not recommended to leave this enabled for multiple jobs because it appends updates to the end of the file, but it does let you see specific actions taken in LB and codes sent to the laser, all with timestamps. I did this file as a test by creating some primitive shapes and starting the job without turning on the laser, just so I could see the output.

I am very happy to hear that you were able to isolate the issue! We are aware that using a powered USB Hub does solve this issue for many people, which is why it is one of the recommendations in the dropouts and brownouts documentation I initially provided. It’s interesting to get a deeper dive on the details, so I really appreciate you sharing your findings with us!

I’ll pass along your feedback.