for grins, I swapped the Y motor onto the X motor driver, and the problem seems to follow the motor. Maybe my belts are too tight? Strange that it moves quite smoothly on power up though.

This is the original board the motors were connected to. I noted the pinout and X1/Y1/Y2 connectors. Am I missing something? I’ve tried using clip leads to experiment with the pinout on the c3d board, but I started getting a little uncomfortable jumping the pins hot, so I stopped. Can anyone confirm the pinout on the cohesion board? I went through all the docs/forum last night and I found a few tidbits that were interesting.

Running out of ideas. Im curious if the issue is something I need to address in the firmware/config or if this is something i need to address in lightburn. Also, at this point, this topic has become a post-sales/hardware installation topic… So if the mod’s want to move it to another thread, or if i should post further information there, please let me know, and I will do so.

You will need to change some settings for sure:

Here you said the homing is to the left rear, but somewhere else you may have said that the Y homing switch is in the front. Which one is it? Which corner does your machine home to (have you witnessed it with the stock board)? I would recommend the following: Line 6 default_seek_rate 24000 Lower this substantially - perhaps to 9000 Line 21 acceleration 2500 Lower to 1000 Lines 44 and 51 alpha_current 0.4 beta_current 0.6 Increase both to the max amps of 1.2 That should get you star…

I would decrease the Y acceleration and turn the currents up to 1.2 amps as discussed there.

You also need to verify that you have the 2 Y motors plugged in with the proper orientation to each other. Based on the videos it looked like you already got this, but I would test it by having both motors plugged in with each other, but not to the board. Then try to move the Y axis by hand. It should move relatively smoothly, and you should not feel a braking or binding force.

I will try these settings and report back. Also, I was thinking it would be easier to plug my second Y motor into the AZ Axis pins and set the jumpers so that Z follows Y. Is there any documentation on this? Or do I just need to move all three jumpers over to follow?

I was going to make a joke about smoke and fire… but thought it was in bad form. Rather I’ll just say, it works! Changed current on xyaz to 1.2, and lowered acceleration to 1000. Now the gantry is moving forward and backward as expected. Now I have to figure out if the laser fires

I have two remaining questions.

1 - How can I setup the ZA pins to follow Y? Do i just move those three jumper blocks over?
2 - I recall seeing a thread about having a test laser button for focusing the diode. Can you elaborate or tell me which search criteria i should use to find the solution?

The gantry moves… But seems like its moving rather harshly and suddenly. It shakes the entire bench I have it mounted to. Should I turn the acceleration down further?

I think I figured out the pins/jumpers. I just moved all three over. I had to flip the orientation of the secondary Y motor cable (quick fix) to ensure the motor operated inverse to the Y1 motor. I also turned down the acceleration and the seek rate. This minimized the amount of shaking my bench was doing. Now to test the laser. Wish me luck!

p.s. any plans for a wireless or ethernet adapter for this board?

welllllll… sort of worked? Didnt cut/engrave/burn anything… Diode comes on, but doesnt appear to do much… The gantry goes completely berserk though… see video

I will say, we’re getting closer! Then I can tear it apart, take pics of the steps taken, and submit for future generations.

And seriously, how much money did they save by skimping on a pull down resistor?! Pennies?

I figured it would be easier for me to upload my config.txt for review. I’ve been tinkering with acceleration and seek speeds. Seems like 2000/3000 is way too fast. I turned it down to 1000 and it is now much smoother. The remaining issues are that the laser wasn’t engraving or burning when it was firing. I dont know what it was. I changed the min laser power setting to .2 and that is too much, because now it fires while jogging/moving manually

I guess I’ll have to turn it back to 0. So I think what will need to happen, is setting the min power back to 0, and max to 1.0? 2.0? I cant remember what it is in the config at the moment. And from there I’ll need to decrease the seek speed down to like 200 or 300 so that it actually does some damage to the wood

In regards to the laser firing when tracking, I did find this thread which talked about the same issue, which is what led me down the path of turning the min power down to .1

Laser firing during fast moves Board Configuration and Setup

Machine: k40 (came with digital controls & m2 nano) Board: C3D Mini Firmware: firmware c3d smoothie 4axis nomsd 3-20-18 Problem/ Question: Just updated to Lightburn 0.9.02 and my k40 with C3D Mini (firmware 3-20-18) is now firing during fast moves while engraving as shown in the image. I uninstalled and reverted back to the last version I was using this morning 0.6.06 and everything is engraving as normal. The thin line through the top of the font is actually part of the font and supposed to … 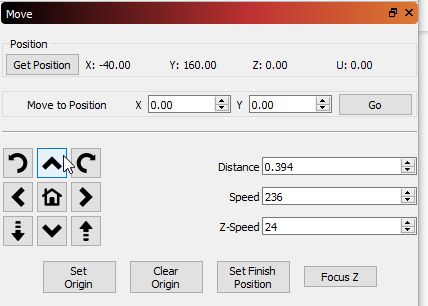 I ended up having to turn the min power back down to zero. I have turned the acceleration down to 200 which is what the cheapo knock off nano was set to originally. Based on my experiments, any faster, and I begin to see striations in my burns. Oh! And in case I didnt mention it, I have successfully run several burn tests! So progress is definitely being made. I have some googling to do today to try and solve the homing issue, which im almost certain has to do with no home sensors/limit switches. I was also caught off guard by the fact lightburn starts its burn in the center of the workspace, regardless of where I position the image/text. It is still burning images twice the size of what it should. Which I’m guessing is buried in the lightburn settings somewhere. To circumvent the issue of the laser firing when being powered off, I setup a American DJ PC4 to control my light/24v/12v adapter. Much easier than just unplugging a cable. In the long run, i’ll probably use some smart switches/strips and setup automation to power down the 12vdc before the 24vdc.

It’s going to take me a bit more time to read through everything here and get back to you.

Sorry… I’ve been using the forum as my notepad obviously

Working through this… slowly…

I was also caught off guard by the fact lightburn starts its burn in the center of the workspace, regardless of where I position the image/text.

Depends on origin and start/ end position settings in LightBurn.

It is still burning images twice the size of what it should.

Probably steps per mm values in the board’s config file. Start by telling the machine to jog 100mm in each direction, and measure how much it actually moves.

It definitely jogs 200mm when telling it to jog 100mm… ill have a look at the config file now that im done traveling for a bit.

ok so which section of the config do I need to change? I see steps per mm, but seems to indicate cartesian robot, and I see A/B/C steps per mm. I assume its the ABC? or is it the alpha/betta/gamma steps per mm?