Can't get full power from LPSU

Board: Cohesion3D Mini Laser Board

Problem/ Question: Since I’ve upgraded to the Cohesion board (and added an ammeter) I can’t get more than 10ma from my power supply. I thought the stock one was just garbage, so I bought a 50W Cloudray MYJG LPSU (110v) and still can’t get full power. Originally, I thought my tube was bad even with low hours on it. So I replaced it with a true 40W tube and the output is still 10ma.

Firing the laser with the button on the LPSU, through Lightburn and through the graphic control panel all produce the same results.

Does anybody have thoughts on where I should look to correct this issue? I’ve been pulling my hair out trying to figure this out and have completely rewired the machine, replaced the LPSU and the tube.

We’d need to know exactly what you have and pictures of your wiring or a wiring diagram to be any help in this situation.

There are simply too many variables at play now that you’ve changed so many components.

Sorry, my wiring diagram skills aren’t super great. But here is my current setup. P is wired up to what I believe is the sensor to detect water flowing through the pump.

I was having the same problems when I first installed the C3D board using the stock LPSU with the stock wiring and I’ve never had the success of several other K40 users with speed/power recommendations. My last 3mm acrylic job took two passes at 100% power (10ma) going at 10mm/sec. So not sure if there is an overall power issue here or not.

Thank you for taking the time to help out! 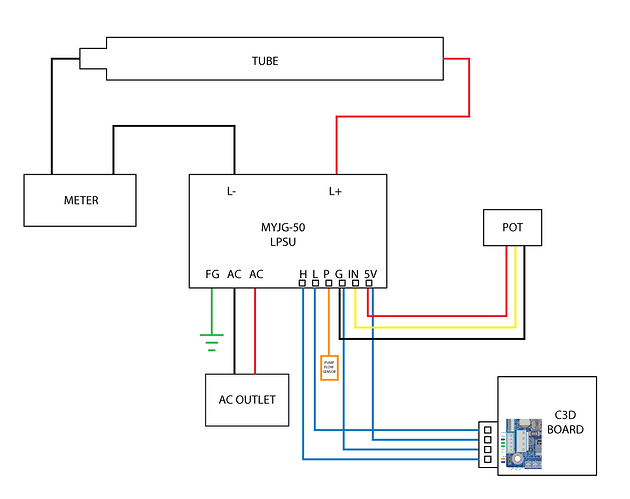 So that it is absolutely clear for everyone, you have a Cohesion3D Mini. Our new controller happens to be called the Cohesion3D LaserBoard, so it is good to avoid any confusion from that

Specifically for the Mini, we capped the the output at 80% so that people wouldn’t run at full power and burn out their tube. No good deed goes unpunished and it ended up as more of an inconvenience and support burden though.

There’s a laser max power line in the config file on the board’s memory card with a value of 0.8
You can change this to 1.0

Then run PWM tuning lines from the article in the forum FAQ section and observe the mA meter.

I’ve already set the max power to 1.0 via the config file, along with adjusting the pwm to 400 and it still maxes out at 10ma (haven’t run the pwm test yet though).

A might be related side note. When I save the config file, I notice that my graphic controller says .8 for the s value. Does that mean it isnt reading the config file properly? Is there a preferred format for the sd card to use in the c3d board?

Verify you are getting the full 5 volts from the power supply. 4.5-5 is good, can even be slightly over. If your signal voltage is low, it could cause overall power problems. If it does this using the LPSU test switch, it’s not the Cohesion3D board, it sounds more like a potentiometer or power supply problem.

Looking at your wiring diagram, the LPSU to C3D looks wrong. You should have L and Gnd go to the C3D Mini. The Mini also needs 24v which we prefer is done from a separate psu for more stability, but that’s a separate matter.

See the last pic of the install guide for the Mini at cohesion3d.com/start for where these wires can go.

The LPSU supplier mentioned that the test button will only fire at 50% power. I’m getting a solid 5VDC signal to the IN pin from the board. The L pin is also reading around 4.7-5VDC and when it is fired, it drops down to 0VDC, this seems correct because it fires the laser when L reads low.

I’ve replaced and tested the pots and they are working correctly.

I didn’t show the rest of the wiring, but I have the C3D board hooked up to an external psu (24v 4A). I’ve wired it up as shown in the install guide and it still maxes out at 10-11ma.

I updated two lines in the config file for max laser power and default laser power to 1.0, still no change. Although, something that is concerning me, whenever I restart the board, the display panel shows my s value at 80%. Is the SD card reader not working to read that config file?

These are similar results I was getting before I swapped out the stock psu with a new 50W. So I doubt it is the PSU.

With the C3D disconnected and hitting the test button on the laser, (not the LPSU) can you get it higher than 10mA? If not, your PSU has problems. Do you have a second way to test your current in case that meter has issues? Double check your grounds, especially the one going to the output end of the tube. If everything checks out and the test button doesn’t get you past 10mA, your power supply needs to be replaced. You don’t need the board hooked up to test output power.

I have never seen an LPSU only give 10mA from the test button. Your tuning values show that it is responding linearly as expected, just that the max output is 10mA or there about. You need a new LPSU in my opinion.

This is from the LPSU supplier; “If you use test button, it should be 50% max power output.
That is default setting. If you need 100% output, you need input 5VDC to Port IN.”

The board is sending 5V to the IN pin. It is literally a brand new PSU and 40W tube and when I swap back to the original PSU and tube the results are the same. I’m almost positive that it isn’t the PSU.

I’ll try testing the output with a different meter, but I’m guessing it is reporting accurately. Mostly because I can’t even cut through 3mm cardboard at “100%” power (10ma) at 10mm/sec. Something funky is going on somewhere and it is either the board or wiring (all grounds seem to be good).

Can you show photos of everything?

@JamieR wiring is currently a mess. But the wiring diagram is exactly how it is setup.

@Cohesion3D and @Chris everything seems to be leading me towards an issue with the config file. When I update it to have max laser power 100% (1.0 or 1, tried both), it boots up and shows the s value as 80%. Led4 lights up on the board, that is what indicates that an sd card is present, but it doesnt seem to be reading it. I’ve tried two sd cards, both freshly formatted as fat32.

So yeah you’ve got it wired wrong. You’ve got the thing connected to both trigger the laser on an active high and an active low.

I removed the H wire a couple days ago.

@Chris My config file just ignores the max laser power setting, posting what I have below. Whenever I turn on the laser it sets it to 80%, even if I change the default_power setting to 1.0. Is there a firmware that I can flash on the board that removes the 80% limit since my config.txt file seems to be ignoring this?

The config file worked for the PWM setting, just not the max power.