Problem/ Question: I have started noticing an occasional distorted display on start with 2 lines of gibberish across the display as have been seen in some posts here in the past. I’m using the Cohesion supplied 4a external power brick for power. I say this because I know power supply quality was mentioned in those previous posts as some of the users were using non-factory supplied power sources. This all seemed to start occurring since installing the relay outlet that is sold here. Every time the board powers on or off it pulses the relay on and back off very quickly. On boot I think the surge of my pump coming on at the same time as the LaserBoard is causing this distortion to occur. It always goes away after turning the machine off and back on again. It also does not occur with the pump disconnected from the relay. So I don’t think the relay itself is the cause, just the fast pulse on and off is making the pump generate some EMI that is causing the display to occasionally have trouble starting. Is there a way to prevent this pulse of the air assist relay on start?

I tried attaching it to the 5v header as described in the directions for attaching the outlet, I also tried the 24v header as the box said the relay outlet is rated for 3.3v to 60v input. Same result, pulse on start with either header.

Other than this the board has worked out pretty well. I had minimal trouble getting my LightObject Z table to behave itself. I’m just confused by why it has to pulse the relay on and off with every power cycle. I can post pictures of wiring if you think that would be useful. I’m just hoping its a self test function or something simple that I can disable somehow.

Edit: If it turns out to be something that can’t be disabled I found this as a potential fix to the pulse on start as it would add a pre-defined delay in to starting the relay that I could set just above the pulse duration.
https://www.amazon.com/Selec-Controls-600XU-1-CU-Analog/dp/B00R5C7MES/

Can we see some pictures of how everything is wired and installed please? 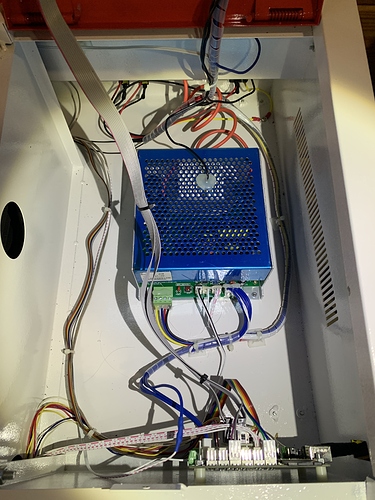 On the board the connections are as follows. Starting from the top. Min and max Z end stops, K40 end stops, LPSU power, LCD cables, stepper motors, and air assist.

The reason the LPSU cable has a pin removed is the red dot laser was wired to it from the factory by wrapping the cable around pin that the connector was on. I didn’t think it was very safe so I removed the 5V pin from the plug and more securely connected it as it is unused by the Laserboard. I grounded the red dot to the screw terminal for the LPSU.

The only time I get the display corruption is if the I have the 3-prong plug for my air pump in the bottom pic attached during startup. The relay still pulses on and off without it attached but no display corruption. So I doubt the relay itself is the cause. When the Laserboard pulses the relay on start and the air compressor comes on for a fraction of a second then back off sometimes this makes the display go garbled until I restart the whole machine.

Here is a video of the pulse happening on machine / Laserboard power up and then power off. I also realize I have the water pump plugged into the normally on switched outlet. I bridged it to the always on outlet so they are both always on. The only outlets that are switched are the normally off outlets for the air assist. No corruption appears unless the air pump is plugged in during the pulse on startup.

I should also add that I did try looking in the config for causes as well. I saw the default config lists the fan switch output (air assist) as pwm when for a relay like this I would think it would want a digital output. Changing that had no effect. I even tried booting without the sd card and the pulse still occurred at power up and power off. So I’m doubting its a config issue.

Another test I just tried was removing all cables and connections from the Laserboard except the 24v 4a PSU and the air assist relay wire. The relay pulse on power up and power off still occurs.

Our docs on this:

You are here: KB Home Other Product Resources AC Relay for Air Assist/ Exhaust Setup Overview The LaserBoard can automatically control your air assist, turning it on when a job starts, and off when a job finishes, and can also be set per layer for a...

Do you see a difference between your wiring and the guide?

Yes, I tried it both ways as mentioned in my original post. It does the pulse on the 5v header as well. The relay documentation said it could accept up to 60v input so I tried on the 24v output to see if it would eliminate the pulse on start and shutoff.

Edit: I’m wishing I had an oscilloscope right about now as I’m betting the pulse is timed to right as the Laserboard PSU coming up in voltage on power on and falling down after disconnect and not while at full voltage. If I unplug the Laserboard PSU DC cable from the board it still has enough residual charge in the LaserBoard to pulse the relay as it is unplugged. I realize the PSU capacitors hold a residual charge after unplugging the AC cable so I unplugged on the DC side for that test.

I’ve seen this with some microcontrollers before, some of the output pins are high on power up and power off for a split second when the voltage is below normal operating thresholds. I guess what I’m trying to figure out is if this is just normal behavior of the board. If so, no biggie. I’ll just add a delay relay timer like I mentioned in my initial post.

I recognize that outlet from shopping on Amazon. I believe it has a mechanical relay and I do not know what input circuitry that it has to prevent surges when you de-energize the relay. It might be useful to try putting a general purpose diode with cathode to the + side and anode to the - side of the relay input. When the relay field collapses after turning it off, it generates a pulse that can wreak havoc on low-voltage circuitry. I have seen this happen in other applications. It is a cheap thing to try before giving up. FWIW, I use a 30A solid-state relay with an opto-isolated input and have zero problems but you are working with high voltage and need to know what you are doing.

I believe it has some sort of input circuity and is not tied directly to the electromechanical relay. It has a wide trigger voltage input range for both AC and DC. DC is 3.3v-60v. I had thought for a moment it might sensitive enough to be EMI from the LPSU coming on and off that was triggering this. I eliminated that possibility by just disconnecting only the LaserBoard DC power source and reconnecting, which still caused the relay to pulse on an off at disconnect and again at reconnect.

But if such an electromechanical relay does exist with a wide voltage range please correct me. I am used to seeing them as having a signal set input coil voltage. Solid state relays are a different story.

In order to confirm that nothing else external is causing this I have removed my LaserBoard and just connected it to the relay as described in the documentation. The same still issue exists. Please see the video below.

I ended up buying the time delay relay I mentioned in the first post. It solved the display corruption issues. A .2 second delay was enough to eliminate the pulsing of the air assist pump without delaying the air assist too long during actual use of the laser. It’s not the best solution but it works. I’m hoping there is still a way to resolve this issue with the board so it doesn’t pulse the relay line to begin with. If it’s just how the board works I’ll live with it, but I would like to know if it is normal behavior or if my board has some sort of defect. Thanks

A lot of the concerns that you pointed to like the screen garbling pointed to electrical interference or a possible brownout - I’d suggest looking into whether all cables in your cabinet are isolated from each other, and also how your AC wiring is handled - for example is the board and relay on the same power strip?

I remembered from my research that the input on that relay was only rated for 3-5v in DC, which is why I brought up how you were driving the input of the relay from the LaserBoard.

The air pump is only 32watt, even at start the inrush will only be so big on that. Although I’m sure the air pump has something to do with the garbled display as it didn’t occur with it unplugged. However the issue would not be occurring if the LaserBoard wasn’t pulsing the output as shown in my video. The relay fix proves that by adding the .2 second delay in.

All devices are attached to the relay power strip. I bridged the normally on outlet to the always on so they are both always on. I use a 16ga power cord as suggested.

I also did find the documentation where you would have seen the input being 3.3v and 5v, but it was just saying those were allowable. They are not the only options. I have attached the document and a picture of the input rating on the relay itself.

Display issues aside, as I’ve figured out how to deal with it using the relay. My only question now is, is the pulsing on start as shown in my video above normal behavior for the LaserBoard? 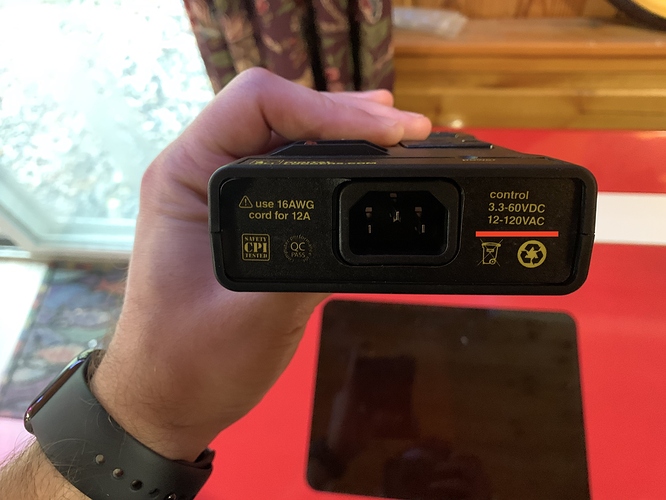 I would prefer for this topic to not auto-close before I get an answer to this. All wiring done properly per documentation in the video and the issue still exists with the pulse on start. Using the time delay relay blocks the pulse and also prevents the display distortion but does not eliminate the original cause.